Here’s the process of the construction and painting of my NAFC Duel entry.

I was inspired by all of the outstanding entries of the 2014 Duel competition to such a degree that on the drive home an idea for the below popped into my head. Having been an life long Dark Elf player I appreciated the dynamic poses of the new GW Witch Elves, this exact pose has been used for one of my team Witches, so that was a no brainer.

When it came to her opponent I looked through the GW web store (barren as it is nowadays…) and remembered the Animosity Orcs from WFB, such great models that were crying out for some Blood Bowl action! It was a simple job of adding the arm holding the ball & green stuffing the join (a 40K Ork arm that usually holds the firearm), scooping out the head (!) of yet another unfortunate 40K Ork to gain his helmet and adding a shoulder pad from the WFB Orc sprue to make the Blood Bowl-ification complete.

You’ll notice that the Witch is leaping off the broken body of a fallen Gobbo, this was also from the Animosity Orc kit, and he’s normally being wielded as a weapon by another greenskin. So I removed the hand griping his head & flattened the back his body, with that he was ready for the diorama. 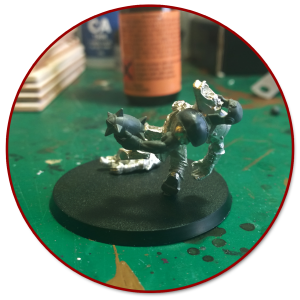 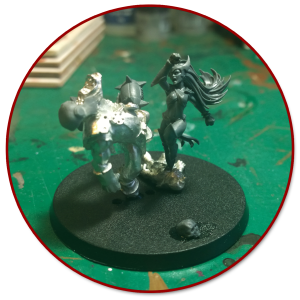 I followed an old White Dwarf ‘Eavy Metal article for the orc, it was taken from the scheme for the plastic Ork Warboss, the Witch Elf utilized the new Wash & Mediums GW now produce. The blood is a mixture of GW’s Blood for the Blood God (what a stupid name…) & Tamiya Red.

You can see that I kept the Duel’ers separate for the painting, that way I could position them much more closely once they had been painted.

I talked the resident Team Model Maker, Alan ‘Lamby’ Casey about a display base for the project. (You may know him from his awesome Dwarf Slayer team with custom beer barrel display) Things quickly evolved from a classic wooden display base, to a Block Dice and finally to a rotating display Block Dice!

I re-drew the dice face icons in Illustrator and then sent them over to be used in the laser cutting of the faces, the rest of the craftsmanship was then expertly executed by Lamby, including all the whirly gubbinz & gears contained within the base to make it rotate.

Here are some multi-angle shots of the finished piece: (Click to enlarge) 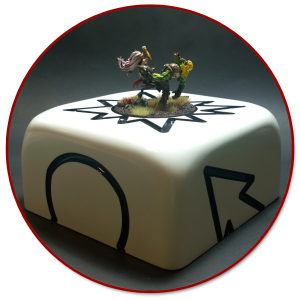 Here’s a video of the finished piece in motion.

If you want to contact Lamby about some equally insane custom work, email him at: lamby@manticore-inc.co.uk